"The Moon in Viet’s Land" – An extraordinary puppet stage

The Vietnam National Puppetry Theater has just launched an experimental art program called “The Moon in Viet’s Land”, which is a remarkable experiment in finding and changing the form of expression for the puppet theater to improve quality of art
12-01-2021 Lượt xem:
At the same time targeting the main audience of this program is to serve tourists. People's Artist Nguyen Tien Dung, Director of the Vietnam National Puppetry Theater, author and director of the experimental program The Moon in Viet’s Land shared: "The moon is built from the desire to have a show for tourisim with many cultural and artistic colors such as in some countries, for example: Thailand, Korea ... That's why this time, the creative team used many performance elements such as national music, dance combined with puppet arts to create an attraction. We have boldly introduced the unique cultural features of many regions so that when tourists coming to see the program, they will have some knowledge of many unique cultural features of Vietnam.
"The Moon in Viet’s Land " is a gifted object that is bestowed by nature, close to a beautiful, peaceful, but very familiar image in every human being. In the dark night, the moonlight shines brightly, everything is covered with shining and magical halo of light. The moon is an endless source of inspiration for many poetic ideas, songs, sentences, and romantic works of poets and writers around the world. With the great beauty of the moonlight, the idea of using the art of stage puppet combined with water puppetry in harmony with national music is transformed on the stage of the Vietnam National Puppetry Theater into a unique traditionally contemporary work titled " The Moon in Viet’s Land " to introduce the national culture features to audience.
The audience will satify with the moonlight and enjoy the cultural features of all regions on the beautiful land of Vietnam. From the remote mountainous region with ethnic boys and girls dressed in colorful impressive costumes, loudly chirping voices, the sound of flute flying in harmony with the cool moonlight; Colorful umbrellas adorn the mountains and forests more splendidly under the moonlight in the mountains. The moonlight stretching in the Midland next to the sound of the water rattling, the more romantic space under the moon is the dating place of couples, men and women, silhouettes of storks fluttering across the water. The warm moonlight brightens the land of the Central Highlands with mighty traditional dances of the great nation; The moonlight is sweet again in each story and sentence for the ancient capital of Hue. The audience was immersed in the warm moonlight of the southern land with sweet folk tunes, golden tray dances and unique lotus dance.Through the image of the moonlight, the typical cultural messages of the Vietnamese ethnic groups are brought to the stage of puppet show in a surprising way, transformed with many pieces, puppet tricks combined with the national orchestra bring a new, creative performance. Contemporary, uplifting mixed music is still traditional, combined with sound - modern and elaborate light, funny puppets, open-stage space create "The Moon in Viet’s Land" full of quality poetry, characteristics and meaning in introducing the arts and culture of the beautiful regions of Vietnam. It is known that the Vietnam National Puppet Theater will officially sell tickets for the audience to enjoy "The Moon in Viet’s Land" from February 8, 2021 (ie December 27).
Ha An - Father’s land Newspaper 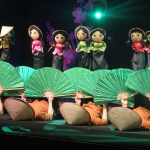 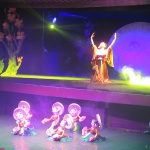 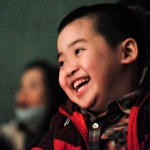 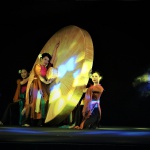