Water puppetry art is popular in many different ethnic groups in the world and in the region. However, water puppetry now only exists in Vietnam. Through the ups and downs along the history of the nation, Vietnam’s Water Puppetry still exists today thanks to inheritance through many generations. That is the root for Water Puppetry to increasingly assert its role and position in the Vietnamese theatrical arts.

Vietnam’s Water Puppetry is maintained on a large scale in many localities in the Red River Delta and developed in both the local water puppetry and professional Water Puppet theatre.  There are 28 guilds of water puppetry in 11 provinces that exist in the art history of Vietnam’s Water Puppetry. According to the statistics, at present, there are 15 active groups. In the process of operation, the preservation of traditional values ​​of the Water Puppetry Art is always focused on groups and theatres. At present, most of the groups are performing a program of 17 performances of folk water puppetry restored by the Vietnam National Puppetry Theatre. The research and creation of the Water Puppetry has also been invested by the groups in two directions: Firstly, it is developing new puppetry performances, based on the essence of the colourful traditional puppet show. Secondly, it is developing puppetry performances, with modern themes.

The forms proposed for the development of traditional Water Puppetry art of Vietnam on the path of cultural integration has some points as follows:

- Support resources and funds, create favourable mechanisms for operation and socialization, calling for funding in various forms so that the water puppetry groups can operate stably and regularly and artists are assured of artistic activities.

- Implement the special policy regime in preferential treatment and give the titles for artists and consider them as a living museum, so that they can devote themselves to artistic transfer to their children.

- Plan and develop water puppetry groups throughout the country, associated with tourism development, considering each group as one of the unique cultural destinations of domestic and foreign tourists.

- Develop specific international cooperation programs according to annual plans, prioritize the development of friendly cooperation relations with countries in Southeast Asia, ASEAN countries and the world in accordance with the motto of accepting and actively introducing the Vietnam’s Water Puppetry Art and absorbing the cultural and artistic quintessence of the world. In addition, it is necessary to promote relations with countries with traditional theatrical arts such as China and Japan, etc. which are also influenced by the current trend of globalization and international integration to learn and exchange experiences in promoting and disseminating the water puppetry art as well as studying how to preserve, promote and develop this art.

- Promote activities of exchanging and linking water puppetry groups, intensifying exchanges and cultural integration through the organization of art performances of water puppetry in foreign countries as well as performances of foreign traditional artistic units in theatres. The content of exchanges with international art troupes, in addition to performing arts, should focus on the organization of seminars, exchange of experience organizing art performance activities and professional skills with foreign governing bodies and art units.

- Formulate the strategy of promoting the art of the nation in association with the development of tourism in the course of exchanges and international cooperation. At present, the integration of national cultures into the common culture of mankind is becoming a requirement, a duty and must be raised to a new height. The creation of appropriate cultural exchanges, integrating into the intertwining of East-West cultures, innovation in artistic creation, in training, improving the quality of the art team. The artists and audience appreciate the cultural value of the Water Puppetry combined with the promotion of information dissemination and propagation activities in accordance with the laws of the market economy and the rules of exchanges, cultural adaptation and international integration of Vietnam. 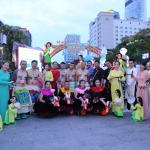 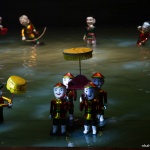 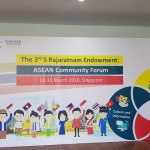